2020 is the 750th anniversary of the establishment of the Parish of Rickmansworth and we will be marking this significant event with a series of commemorative events during the year.

A little bit of history

The first records of a church building in Rickmansworth date from the end of the 12th century although it is known that Rickmansworth was an inhabited area for many years before that.

In 1219 Pope Honorius III confirmed the ‘church’ to the abbot of St Albans and the first record of a Vicar is of Richard de Chelveston in 1270.

The original parish was much larger than it is today, extending over Croxley Green, Moor Park, Batchworth, West Hyde, Mill End and Chorleywood. As the community grew, new parishes were formed: 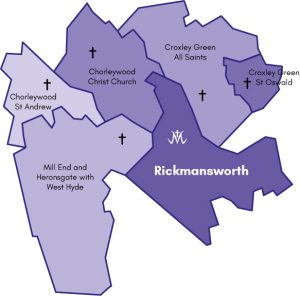 The original Parish of Rickmansworth

Nothing remains of the church building from this time and the oldest part of our present church is the tower, built in 1630. The present church was rebuilt in 1890, retaining the aisle walls from the 1826 building.

> Find out more about the history of St Mary’s…

Sadly, due to the COVID-19 pandemic, our programme of events for this year has had to be cancelled. We hope to be able to reschedule them at some point in the future.

Meanwhile, have a look at the timeline of the last 750 years and admire our special St Mary’s 750 flag that is flying from the flagpole on the tower.

You can also visit the Three Rivers Museum and see a special display about people who are commemorated in St Mary’s.