There is no record of any church in Rickmansworth before the beginning of the 13th Century but since then it has had a chequered history.

The first recorded vicar was Richard de Chelveston in around 1270. Nothing remains of the earliest church building although it seems to have been about the same size and layout as the main building standing at present.

Some time between 1514 and 1529, with Protestantism on the increase in Rickmansworth, some of the parishioners, angry at ecclesiastical malpractices, broke into the church and caused much damage. The appeal for funds for the restoration of the church was successful for many wills of parishioners between 1530 and 1536 contain bequests for this purpose.

The years after the Reformation were full of difficulty and though the present Tower was added in 1630, ten years later the church was further damaged. The church was ‘beautified’ in 1677 and again in 1803.

By 1824 the condition of the church building had become so bad that it was pulled down (with the exception of the tower) and replaced by a new building to accommodate 2,000 people.

The new church was finished in 1826. It was a large, austere, rectangular brick structure, with side aisles which survive today, and a very small recess at the east end to accommodate the sanctuary. There were galleries round three sides of the church, with the organ and choir at the West end.

Some 62 years later the local church council decided that the church should be pulled down and replaced by a church building designed to harmonise with the tower, and to reproduce, as far as possible, the old church of 1825. The new church was built to a design of Sir Arthur Blomfield, a well-known church architect of the time, and is in essence that standing today.

The tower and vestry were extensively refitted in 1999-2001. In the case of the tower, this was partly as a fire precaution, and to open up a vista and improve the appearance of the ceremonial entrance to the church through the West door.

A nave platform, to accommodate the central altar now used at Parish Communion, and a Lady Chapel for private prayer have since been added.

The Church Centre, a joint project with the Methodist Church with whom we shared our buildings and worship for some forty years, linked to the church on the south side, was opened on Sunday 30th May 1982 by the Bishop of St Albans and the Chairman of the London NW Methodist District. 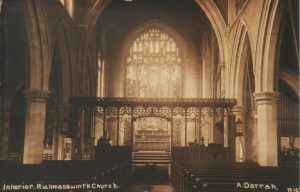 Visit the Three Rivers Museum in Basing House for more information about Rickmansworth and the surrounding area.