Over many years there have been suggestions about improving the organ in St Mary’s church which was originally made by Compton and installed in 1952. After nearly fifty years, refurbishment of the post war electro-mechanical action and wiring was becoming necessary. Also many of the congregation and visiting organists felt that it was neither powerful enough for the size of the church nor gave the range of musical colour required for good performances. Generous gifts have made it possible for the organ to be refurbished and augmented to overcome these criticisms.

Several organ builders were asked to quote for the work and the Parochial Church Council was also advised by the Diocese. Options considered ranged from disposing of the Compton and replacing it with an entirely new instrument or to purchasing a second hand Victorian organ. The Council also had to consider placing the new instrument at the West End or in either of the North or South choir arches. Additionally, because St Mary’s is a listed building, the various interested conservation bodies concerned had to be satisfied about the location of the instrument and the design of the casework.

Tests were made to assess the acoustic properties of the Church and consideration was given to the requirements of parish worship and recital performance.

The Council awarded the contract to Saxon Aldred of Redbourn who they felt was most suitable to incorporate the existing Compton work and to ‘voice’ the pipes in such a way as to cover the whole organ repertoire within the context of the building.

The existing organ by Compton, which had about 360 pipes, became the Swell section. Its case had shutters added on the west side to strengthen the sound in the main body of the church. A new rank of 61 Open Diapason pipes was added to replace the 8ft Principal stop moved to the Pedal section and 183 new pipes were added as a cymbale mixture stop. These additions enhanced the tonal balance and volume control of the Swell section.

The Pedal organ, sited behind the Swell to the south of the choir, was strengthened by the transfer of the Principal stop from the Swell and the addition of second hand sub bass and flute stops from a redundant Norman & Beard organ at Haileybury College.

The new Great Organ, located on top of steel girders and weighing a ton, in front of the arch on the south side of the Nave contains eight stops including 659 new pipes. These were sited to provide clarity of sound to the congregation in the Nave and specified to give a broad range of tonal colour. The casework was hand made in English oak and the carving is in lime.

The console was refurbished and restructured to accommodate the increased number of pipes and stops but remained on the north side of the choir. The two manuals and pedal boards are connected to the pipes by electronic cables running through ducting in the floor by the chancel step. Wind pressure is provide by one 1/2hp blower supplying the new Great and the original blower supplying the Swell and Pedal sections

Saxon Aldred was responsible for the overall work and he was assisted by:

Every individual pipe was tuned and ‘voiced’ by Saxon Aldred in his workshop and then in St Mary’s. Once all the pipes had been installed Saxon then had to make further adjustments to achieve the optimum balance and volume within St Mary’s in both an empty church and also with a full congregation present.

Since the opening recital in October 2001, favourable comment has been received from listeners and players alike. The congregation is confident that our new organ will sound to the greater glory of God for well into the 22nd century. 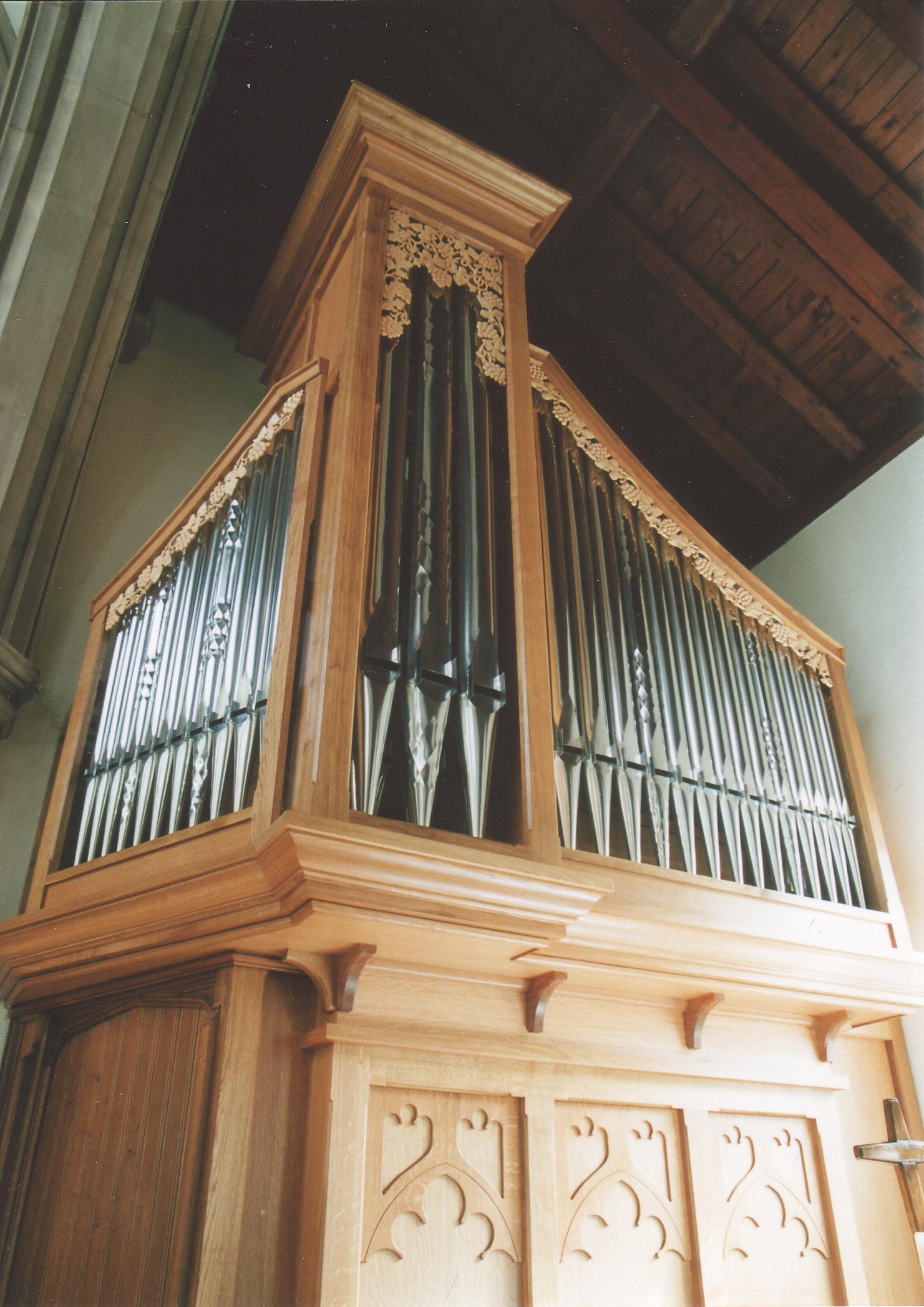