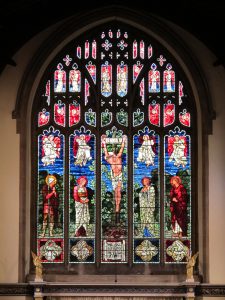 On entering the church from the tower, one immediately sees the large east window above the altar. The window was designed by Sir Edward Burne-Jones (1833-1898) and William Morris (1834-1896). It was made by Morris & Co.

The window has five lights and tracery. The centre light shows the Crucifixion with Christ nailed to a living tree with a serpent at its foot.

The two lights on the left show a centurion and Mary Magdalene. Above each is a flying angel holding a scroll. Those on the right show the Virgin Mary and St John, also with flying angels above.

The stonework containing each pair of side lights forms a Gothic arch and each individual side light is contained in a stonework frame in the form of a candle.

Reading from left to right, the scrolls held by the flying angels contain the words:

The glass painters are listed in the William Morris Catalogue of Designs dated March 1896 as follows:

The two top panels on the left and on the right have the heads of angels looking down. The two quatrefoils in the centre are made up of small windows filled with simple pieces of stained glass portraying leaves of the tree and feathers of angels’ wings.

The left and right hand panels at the bottom of the window contain the Evangelists’ emblems – a winged man for St Matthew, a winged lion for St Mark, a winged ox for St Luke and an eagle for St John. The emblems were drawn and painted by Campfield.

The brass plates under the window say:

The porch window depicts St Christopher carrying the infant Jesus. It was donated in 1946 in thanksgiving for the cessation of hostilities.

The designer and maker are unknown but it is probably of pre-war style.

The maker’s mark, in the form of a seagull, may be seen in the top right hand corner. 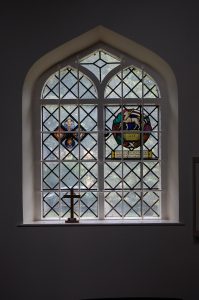 This window by the Lady Chapel contains a small panel with the Paschal Lamb carrying the Banner of Victory. Underneath are the letters Alpha and Omega. There is a surround of corn, grapes and vine leaves.

At the bottom of the panel there is the inscription:

The panel is signed Starmer. W P Starmer of Harpenden worked in Bushey and belonged to the School of Herkomer.

Alongside the Clubbe window there are four panes of glass arranged in a diamond. The top pane is a fleur-de-Lys, the bottom pane is a bunch of grapes. There is a convolution, or swirl, on each side. There is no information on these panes but they were probably made from pieces of old glass. 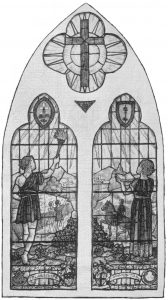 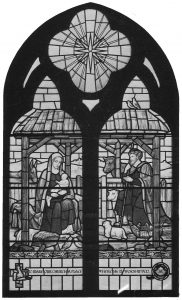 The original Methodist Chapel in Rickmansworth was built in 1843, but sadly it was gutted by fire on 1st November 1865. However, a Building Committee was quickly formed and a new chapel was opened on 26th November 1866. The Chapel was a brick building with stone dressing and an octagonal tower and spire with a clock and three bells.

There were three stained glass windows which formed a triptych – Nativity, Crucifixion and Redemption:

Both the Fellowship windows had two lights and were made by the Whitefriars Studio in London.

In 1975, as membership of the High Street Church had dropped since the opening of the new Methodist Church in Mill End and, as it would cost £20,000 to carry out repairs necessary to the roof and electrics, it was agreed the church should be sold. At the same meeting, there was a majority vote in favour of ‘Unity in Principle’ with the Anglican Church of St Mary’s.

The sale of the church went ahead and Stained Glass Window Studios were instructed to remove the windows and make them safe for storage. It was hoped they would eventually be installed in St Mary’s Church. The final service in the High Street Church was held on 30th September 1979. 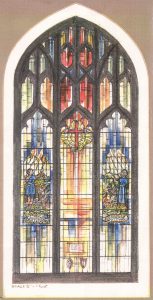 In 1995, designs by Alfred Fisher FMGP of Chapel Studio were implemented to incorporate the glass from the Methodist windows into the larger windows of St Mary’s Church.

Chapel Studio was founded in 1973 by Alfred Fisher and Peter Archer. They were joined by Robert Holloway in 1976. All three had worked in the stained glass studios of Whitefriars in London which had closed down in 1980 after 300 years of production.

Chapel Studio is in Kings Langley, Hertfordshire and works closely with the National Trust, English Heritage and the Council for the Care of Churches as well as many architects and local authorities.

Examples of restoration and new work carried out by Chapel Studio may be found in Westminster Abbey, St George’s Chapel, Windsor, Oxford and Cambridge colleges and many other cathedrals and churches.

This project formed one of the four ‘pillars’ of the St Mary’s Renewal project to refurbish the church in the early 1990s. Fundraising activities and generous donations made this project possible.

The Methodist windows were incorporated into the north and south windows of the Sanctuary. The new windows are taller than those in the Methodist Church and the north window, with the Youth Fellowship panels, is considerably wider with three lights instead of two. 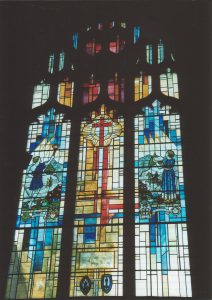 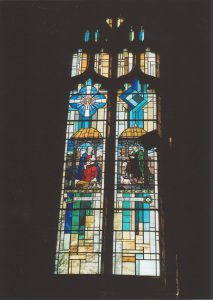 The new designs involved the addition of carefully selected coloured glass to fill the additional areas – work which required great skill to give the effect seen in the finished windows.

The installation was completed in December 1995